On August 2, Benetti’s Viareggio shipyard launched 47-meter custom mega yacht FB703 M/Y “Bacchanal”, with a steel hull and aluminium superstructure. For the second time, after owning a Benetti Classic, the Mexican owner chose the Italian shipyard for a yacht that is the epitome of simple, elegant taste. The exterior styling is by Benetti, while the interior décor is the joint work of architect Mauricio Gómez de Tuddo and the Benetti Interior Style Department. 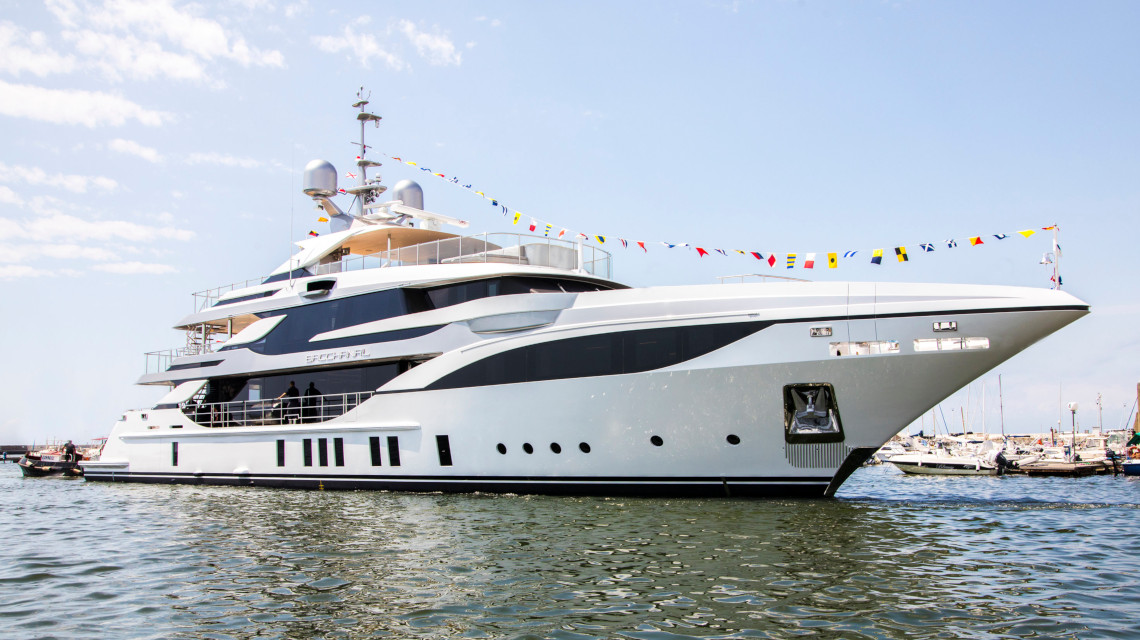 Benetti custom mega yacht FB703 M/Y “Bacchanal”, with a steel hull and aluminium superstructure, was launched in a festive atmosphere on August 2 in Viareggio. At 47 meters in length and with a draught of 2.45 metres, FB703 has a gross tonnage of just under 500 tonnes.

Despite the international feel of the yacht’s style, influenced significantly by architect Mauricio Gómez de Tuddo who worked with the Benetti Interior Style Department on the décor, M/Y “Bacchanal” is permeated by unique furnishings “Made in Italy” by brands like Minotti and Paola Lenti, as well as by Giorgetti, Rimadesio, Poltrona Frau and Exteta.

The design of the sleek, elegant exteriors is entirely the work of Benetti.

The layout, designed to accommodate 12 guests and 7 crew, is spread across four decks, on which both interiors and exteriors share the same uniform approach. This effort can be seen most clearly on the Main Deck, where the cockpit, dining area and main lounge are divided by full-width frameless sliding glass doors, creating an airy in & out veranda space. The pleasurable sensation of being out in the open air and having more direct contact with the sea makes the spaces seem larger and fills them with natural light. This solution is enriched and enhanced by the choice of teak floors with black caulking in both indoor and outdoor areas.

The night area for guests, consisting of two VIP and two guest cabins, is on the Lower Deck, as are the crew quarters. The captain’s accommodation and a third VIP cabin are on the Upper Deck. The full-beam owner’s suite, entered through a private study, is in the bow section of the Main Deck. The custom pool on the Sun Deck is clad in mosaic by Sicis, representing the ultimate in elegance.

M/Y “Bacchanal” is equipped with a 3D sonar system to increase onboard safety, allowing to identify bodies in the sea and providing information about any obstacles up to and over 500 meters from the yacht.

FB703 is powered by two MTU 12V engines and cruises at a speed of 14 knots, with a range of 4,000 miles at 10 knots, allowing it to make transatlantic crossings.