SUCCESS FOR THE PHYGITAL EDITION OF BENETTI YACHTMASTER

The 21st Benetti Yachtmaster, organised in phygital format on February 18 and 19, was a huge success, with over 250 people, of which 125 captains, connected from all over the world to follow a rich programme of meetings, workshops, analysis and the virtual trade show, the online space where event partners showcased their products. 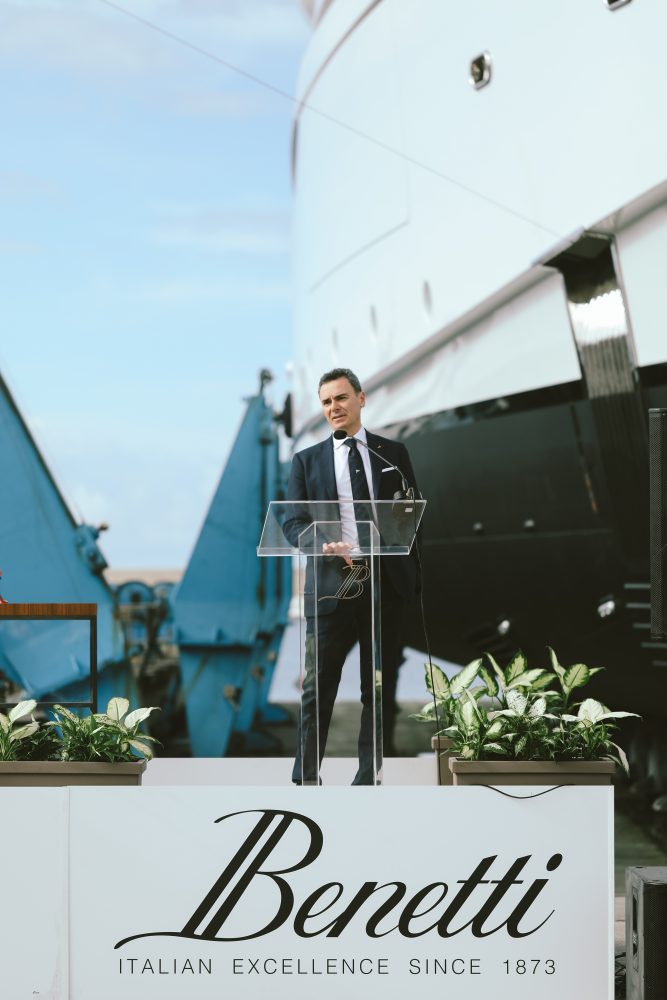 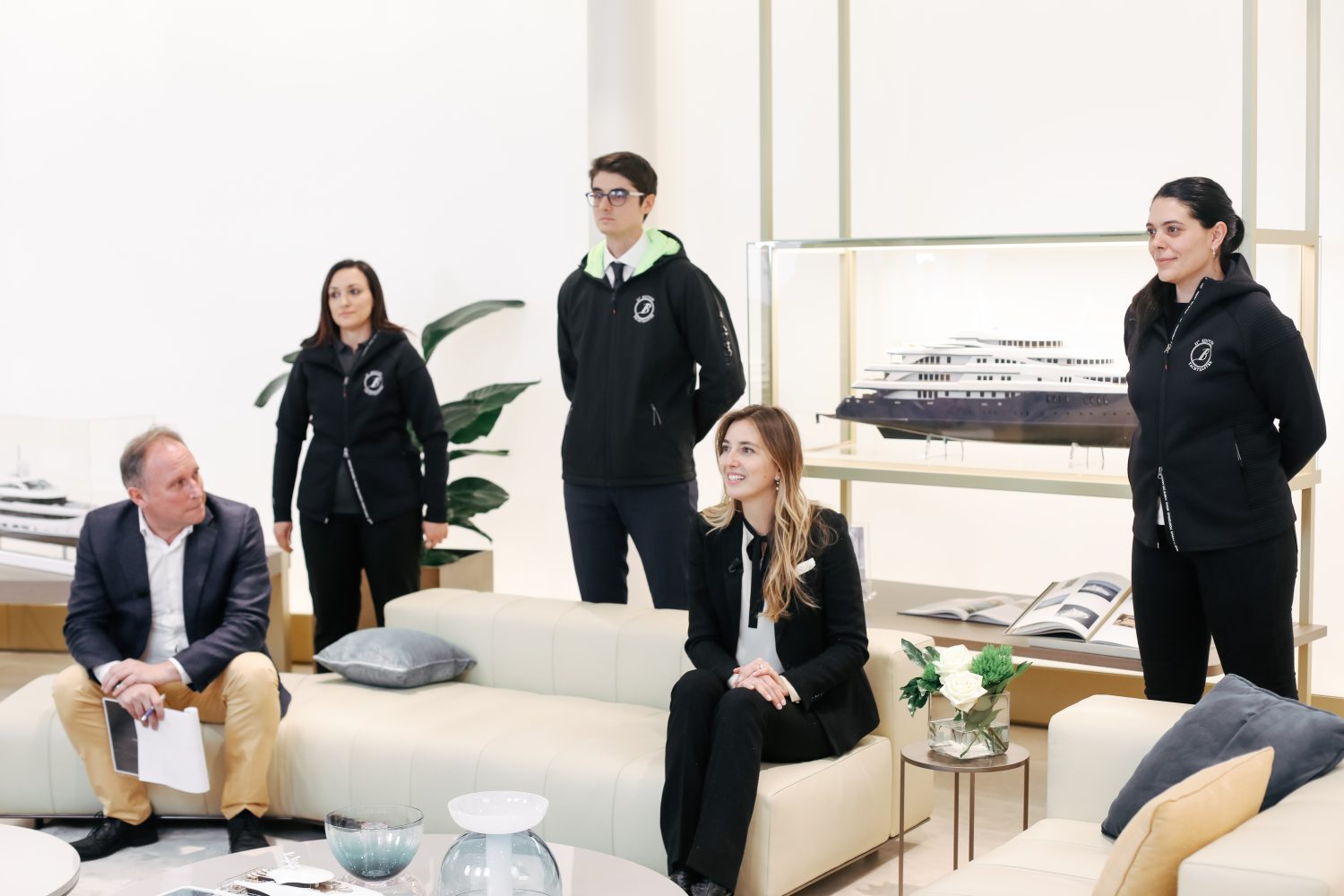 The Yachtmaster, the event organised by Benetti for captains, crews and all yacht industry professionals involved in the life cycle of a superyacht, now in its 21st year, was held on February 18 and 19 in a phygital edition: more than 250 people connected to a specially created virtual platform in collaboration with Live Forum, to follow the online meetings, seminars and workshops planned. The new interactive format was a huge success and the Virtual Trade Show allowed Yachtmaster partner companies to showcase their products and communicate in real time with guests. The participants were able to set, after the end of the Yachtmaster and before February 23, appointments with managers of different companies.

The theme running through this edition, moderated by well-known influencer David Seal, was Next Generation Yachts characterised by advanced technology and design excellence.

The event got underway with a welcome speech by Azimut|Benetti Group vice president Giovanna Vitelli, who emphasised the importance in the yacht world of an event like the Yachtmaster, which opens up a communication channel between yacht industry professionals and the shipyard. The resulting conversation drives an ongoing quest for excellence in the finest Benetti tradition, as well as closer ties with owners, of whom 80% are loyal to the brand. Azimut|Benetti Marketing Director Benedetta Moreno then spoke from the Benetti Museum Lounge about the Shipyard’s history, which stretches back over a century, touching on the most important milestones and presenting some of the historical relics on show in the shipyard. Among the most significant item is the fame achieved by Benetti in the 1960s, when they became a symbol of the Made in Italy elegance and refinement and were used by the most important European royal families, such as the Rainer of Monaco, but also by movie and music stars such as David Bowie.

After a brief introduction of the novelties in the Benetti fleet by Benetti Area Sales Manager Toby Walker, the meeting entitled “The impact of IMO TIER III on the Benetti fleet” saw Benetti R&D department Project Manager Gilberto Francescini and Premier Chemicals Sales Director Stephen Lyons, together with partner representatives Giorgio Gallo (RINA Head of Italy & South France Yachting Excellence Center), Ivan Goldstaub (CGT Power System Account Manager) and Carlo Bertoglio (Head of Hug Engineering Italy), discuss the subject of international regulation IMO TIER III on the reduction of pollutant emissions in the yachting industry, which has been extended as of 2021 to yachts with a gross tonnage under 500 GT in Emission Control Areas (currently North American and Caribbean seas plus the Baltic and the North Sea, and soon the Mediterranean and seas in the Far East).

Marco Valle, Azimut|Benetti Group CEO, made an appearance at the end of the meeting to celebrate the live launch of a new 65-metre Benetti custom yacht, as well as to present his own personal viewpoint on developments in a world of yachting that is increasingly sensitive to sustainability-related issues.

Guests then turned their attention to the Virtual Trade Show, discovering the initiative’s partners and the products and technologies they showcased on the virtual platform. After which it was time for the eagerly awaited Owner’s Team Perspective, which featured 63-metre Benetti custom yacht M/Y Metis and her Captain Frank Hesse, talking online from the yacht’s bridge about his experiences, career milestones, and life on board, seen through the lens of sustainability. The live stream then moved to the galley on M/Y Metis, where award-winning chef Italo Bassi delighted guests with an outstanding demonstration of show cooking, during which he prepared traditional Tuscan pici with a special truffle and anchovy sauce.

In the afternoon, two workshops led by Benetti, with partners CGT Power System, HUG Engineering, Lusben and Rina and superyacht captain Dario Savino, looked in depth at retrofit-related issues, with a special focus on SCR and DPF filters and the certification of toxic materials on board yachts. A third workshop with partner Seastema illustrated improvements in navigation systems and helm stations with the contribution of panelist Team Italia, which showcased the results obtained on board several of Benetti’s most famous yachts, including 108-metre giga yacht IJE and the 69-metre Spectre.

In parallel, two workshops for stewardesses discussed onboard hospitality and the relaxing effects of tea, with a tasting organised by ‘tea sommelier’ Domenico Gradia, as well as the well-being associated with 100% ecological products made in Tuscany.

The first day’s proceedings were brought to an end by a closing speech and a second slot devoted to partners and networking in the framework of the Virtual Trade Show.

The morning of the 19th got under way with a yoga session streamed live from the main Deck of “Luminosity”, the 108-metre giga yacht which is the largest hybrid in the world built in Italy by a private shipyard. Sebastiano Fanizza, Benetti Chief Commercial Officer, together with Michele Bechelli, Benetti Project Manger, revealed some of the many secrets of the hybrid propulsion system in a live link from the bridge and the engine room.

The focus then returned to the Virtual Trade Show and the Owner’s Team Perspective, with guest Clinton White, captain of M/Y “Masquenada”, the yacht currently undergoing a refit at Lusben’s facilities in Livorno, where work is proceeding to extend the main and upper decks, to cut and extend the stern, and to refurbish the interiors.

In the afternoon, the programme had the same structure as the previous day, involving two workshops with Awlgrip, Boero, Hempel, Jotun and Lusben that introduced the subject of low environmental impact refits and antifouling coatings, focusing on the standpoint of producers. After the workshop on antifouling coatings, Azimut|Benetti R&D department engineer Iacopo Senarega

demonstrated the Group’s continuing desire to contribute to a yachting industry that is respectful of the marine ecosystem, presenting the results of the European Project “Paint-it – A new environment-friendly manufacturing approach for marine antifouling coating” (LIFE15 ENV/IT/000417 PAINT-IT), a major international research effort co-financed by the European Union through the LIFE Programme, in the area of antifouling coatings for hulls

In parallel, as was the case during the first day, two workshops were dedicated to crews and taking care of the owner and their guests, including an in-depth look at onboard well-being in relation to a healthy lifestyle and yoga.

The event was brought to an end with a closing speech by Benedetta Moreno and David Seal, and a live comedy show with Jim Jefferies, the comedian, actor and writer originally from Australia who, in his unmistakable style, commented ironically on everyday life, interacting with online participants.